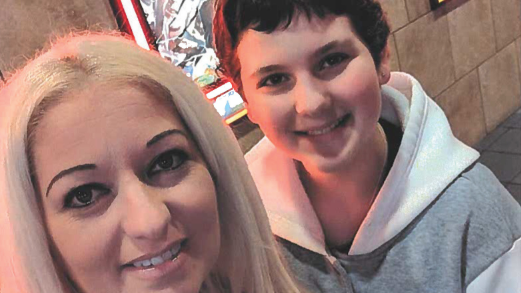 A Wilsonville teen and her mother have been fighting the state for the past several months, arguing that they should be able to treat the girl’s cancer with CBD oil instead of surgery to remove the tumor. On Friday, prosecutors were expected to make a motion for Kylee Dixon, 13, to have emergency surgery — but the state did not go forward with the motion.

Brett Hall, attorney for Kylee and her mother, Christina Dixon, said he got a notice late Thursday that the state was not planning to go forward with the motion on Friday. He said the Friday morning hearing ended up being a status update, with no immediate changes.

The hearing was scheduled after a Clackamas County judge decided on Sept. 27 to postpone surgery for Kylee, the day before she was supposed to have a cancerous tumor removed from her liver.

Hall said he didn’t want to speculate why the judge made the ruling she did, but said the judge hadn’t heard from doctors at any point during the case so far.

“The record doesn’t contain evidence at this point in time to support an emergency situation,” Hall said.

The Oregonian/OregonLive wasn’t immediately able to reach the state for comment.

Christina Dixon also did not respond to repeated requests for comment but has been regularly posting on a Facebook page dedicated to informing people about her daughter’s condition and to raising money. She has posted about several fundraisers coming up in the next few weeks and posted on Wednesday that they were trying to raise money for an expert witness, a pediatric oncologist, to come to the next court hearing.

In July, Christina Dixon was charged with two counts of custodial interference and two of criminal mistreatment after she allegedly defied a court order to turn her daughter over to state custody. Dixon and her daughter had been on the run for several days and were found in a Las Vegas hotel.

Kylee was then turned over to state custody and has since then been living with a foster family.

Throughout her time in foster care and away from her mother, Kylee maintained that she didn’t want surgery. The state has said there is a 70% chance that surgery would stop the tumor’s growth.

Christina Dixon has previously claimed the CBD oil she gave her daughter shrunk the cancerous tumor by 90%. Doctors have not publicly verified that claim.

The next schedule court date for Kylee Dixon is Nov. 14.

Visit subscription.oregonlive.com/newsletters to get Oregonian/OregonLive journalism delivered to your email inbox.

How Long Does it Take CBD Oil to Work?