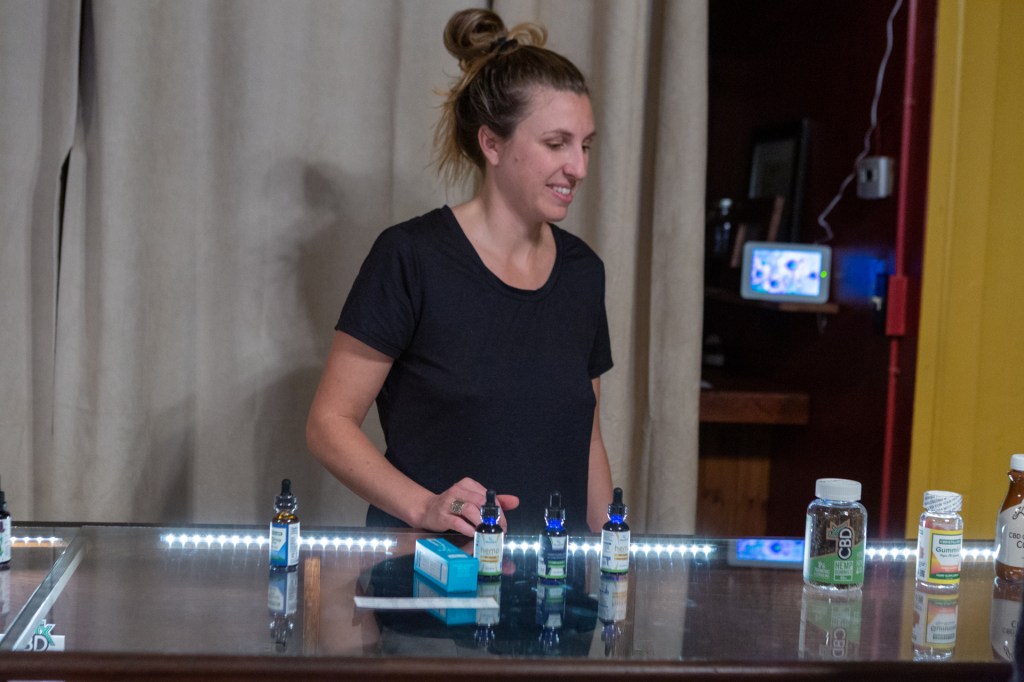 After years of selling her handmade salves and oils at local farmers markets, Emily Held recently opened a storefront in downtown Ukiah for Mama’s Medicinals.

“I love being here and I love dealing with the public,” said Held, who opened her doors in the 300 block of North State Street last November, but it wasn’t until she put the large “CBD” sign in the window that people took notice and called city offices to ask how a dispensary could operate there.

“We can sell CBD, which is Cannabidiol, as long as it is derived from industrial hemp and not cannabis,” said Held, explaining that a fair number of people do come into her shop thinking it sells cannabis. But many customers who know that CBD is not cannabis still come in confused, not sure what the product is used for and how it might help them.

“I’m not allowed to display cards listing the benefits,” Held said, pointing to a display of her handmade products that many claim help with arthritis and other pain, particularly her salves. “I can only tell customers, ‘This is what other customers told me it did for them.’”

What she can say definitively, however, is that “nothing in here will get you high,” since the CBD products she sells have to be derived from industrial hemp, which does not contain the psychoactive component in marijuana called THC. While some packages of CBD list potential benefits, they also clarify that “these statements have not been evaluated by the Food and Drug Administration. This product is not intended to diagnose, treat, cure or prevent any disease.”

Held said a lot of her customers are “older people” who have mostly avoided cannabis, either because of illegality or because they didn’t want to feel altered. And even though it is legal to buy and carry a small amount of marijuana for recreational use now in California, Held said many of her customers may still feel intimidated by dispensaries.

Still other customers come in seeking an alternative to cannabis for other reasons, such as they have used marijuana in the past but can no longer.

“I’m looking for something strong,” said a man who came in on a recent afternoon, and Held showed him the small bottles she had with the most milligrams of CBD per drop.

Since there are so many products that deliver different types of CBD in different ways, Held said that people considering using it should do as much research as they can, then as much slow and steady consumption as they can to figure out what works for them.

“Many people start with these packages (of eight) gummy bears, because the packages are only $15, and each bear is only 5 milligrams,” she said. The only product she hasn’t sold any of are the CBD treats meant for livestock, though she has sold products meant for dogs and other pets.

“A lot of people give their dogs CBD treats to help with separation anxiety or for traveling,” she said.

Held also operates the Alchemy Tea House in the same storefront, with a whole wall of loose tea blends displayed behind a sturdy table her father, Jim Held, made for her shop with reclaimed wood.

Held will have a special event for the First Friday Art Walk Feb. 8, and is planning a grand opening on Feb. 15 from 5 to 8 p.m.