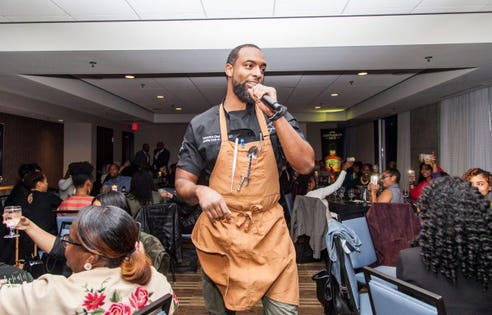 Fresh off serving a four-course, Jack Daniel’s-infused dinner for over 150 women in honor of International Women’s Day, Chef Scotley Innis is on to his next feat: a five-course CBD (cannabidiol) dinner. Set to take place in Atlanta on March 30, the dinner party will also feature CBD-infused cocktails, as well as CBD ointment massages. It’s a culinary endeavor Innis says he and his partner, Erin Newmark have wanted to embark on for nearly a year.

For the Atlanta-based chef and former Hell’s Kitchen contestant, a desire to introduce the East Coast to CBD partially inspired the dinner. Although Innis’ upcoming dinner party could serve as a first in Atlanta, the state of Georgia is quite the ubiquitous market for CBD, especially given the lack of access to medical marijuana in the state. In fact, an August 2018 report from the Atlanta Journal Constitution states that in Georgia, business is “booming” for CBD.

The idea came from pairing fine dining food with cannabis, but we couldn’t do it on that level because of laws that are in play,” Chef Scotley Innis says. “So, we really couldn’t do it on that level unless it was gonna be on the underground. But I wanted it to be more mainstream. And then also just learning more about CBD in general made us both want to have this dinner. The West Coast are the only ones that’s really into CBD, so I wanted to introduce that to the East Coast. Me being a well-known chef in Atlanta and just coming off of Hell’s Kitchen. Me being someone who supports the whole cannabis movement because it gets a bad name in general. They’re like, ‘Oh, it’s marijuana tied into it.’ We want to bring more of an educational level, along with pairing foods and mixed, curated drinks.”

The menu for the five-course dinner has yet to be unveiled, but Innis did provide a few details in regards to what diners can expect. There will be vegan options for those with heavy dietary restrictions and hungry guests can expect to be “fed well.”

You’ll have your vegan options,” Innis says. “Basically, a curated menu infused with different strands to give you different moods or hitting certain receptors. Me, I cook for the soul. It’ll be a smaller plate, but it’ll be a heartier plate. It’s not one of those dinners that you’re gonna leave out of there still hungry. I’m definitely going to make sure that every single one of my guests is fed well. Because yes, it’s a fine dine, but it’s also a healing process through my food and CBD.”

With his five-course affair, Innis hopes that CBD will extend far beyond becoming a trend in the culinary world and will ultimately aid in the decriminalization of marijuana.

“I want it to be more than just a trend. I want it to be an educational system for people, so they can kind of decriminalize marijuana in general,” he says.